I was a director and occasional editor of Magma poetry magazine. I edited the Spring 2013 issue with Karen McCarthy Woolf, on the topic of the soul and the machine, and the Summer 2009 issue, with Rosie Shepperd on the vertical dimension: roots and aspirations. Not to mention Magma 33, Magma 25 and Magma 11. 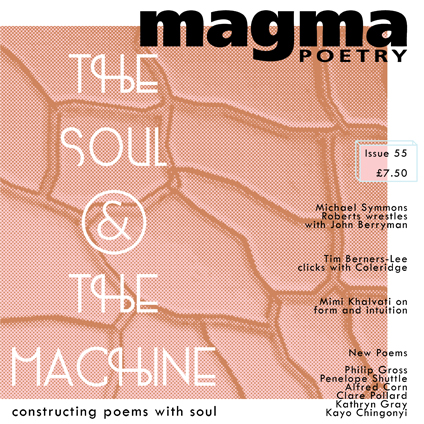 And here's a poem that was never published online but which appeared in Navis. I used it as a calling card when I wrote to Thom Gunn in San Francisco just before a visit there. He liked the poem and invited me over. I spent a wonderful two hours in conversation with him at his Cole Valley apartment, with a glass of wine in the sunlit afternoon. He didn't want me to write up our discussions (I'd asked for an interview) but let me have a poem, Cat Island, for Magma 11.

Escaping from Finland, his death had to cross the snowy waste, left the ski patrol dug in, waiting for new commands, captainless.

At first it seemed to fly above the snow, hid in the clouds, dipped only to sniff at blood here and there, remembering.

But it grew tired and turned to tapping dead telegraph wires; tried to start a frozen lorry, was nearly caught, by ice.

In Sweden it whispered in official ears for transport across the iron route, and travelled the snow-buried forests south.

Baking in its human disguise, it told its story in a Stockholm front room, watched the family felled like lumber into cushioned chairs.

They rose to find the door open, but knew they were not dreaming, for his seat was wetted and the sleet was still falling.

In England, exhausted, it struggled to her doorstep, arranging its foreign face and its clothes still dripping with snow tinged red.

Knocking, its mind raced with the problem of translation, the meaning melting as it waited on the threshold.

She heard not the details but what she knew must live on; saw his wet hand outstretched, and closed the door.

She stowed his photograph in a pile in a drawer. The end of February. Still, his sons and daughters would be born.

This poem appears in Navis, Summer 1996.